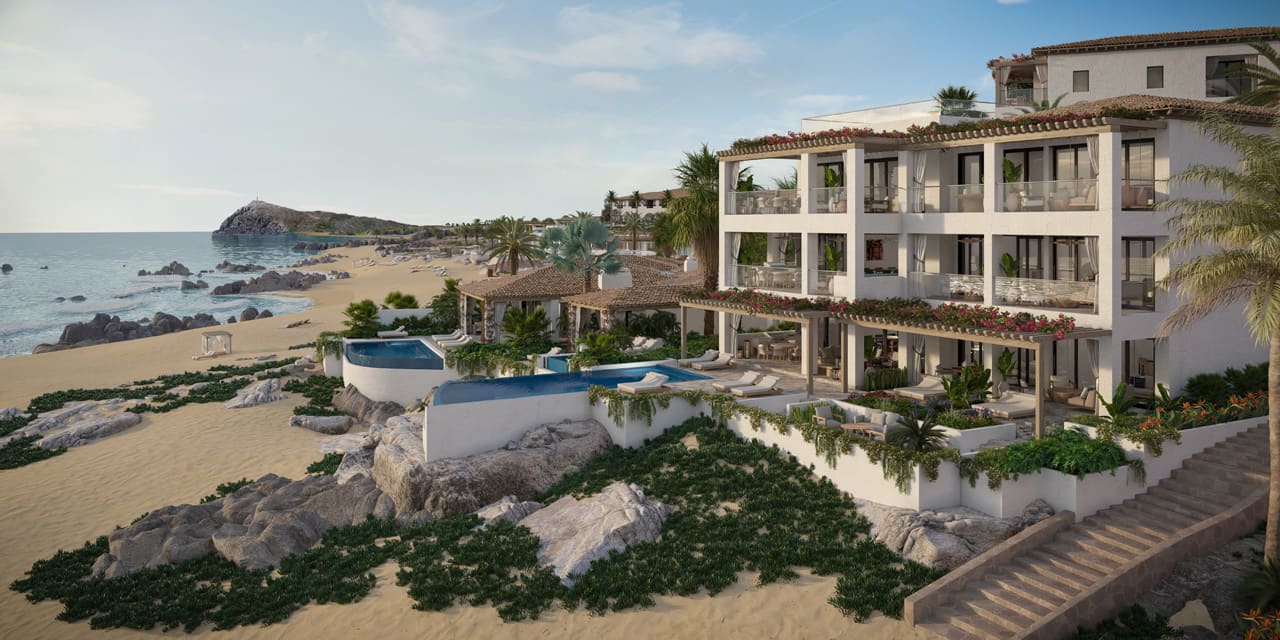 Casa 10, as the residence is known, is the only five-bedroom beachfront unit still available in the project, which is expected to be completed in mid-2023.

Built within Cabo del Sol, a 500-acre resort community with sprawling oceanfront properties in Cabo San Lucas, the Four Seasons will include 61 signature residences and a 96-room hotel.

Following: Punta Mita, Mexico, spends its day in the sun

The developers kept the Four Seasons resort low-slung to emphasize a connection to the beach and the ocean, said Erin Dixon, vice president of sales for development. “A building that is only three stories tall makes a huge difference,” she said. “Rather than living above the beach, like many resorts in this area, you live on the beach.”

The layout of Casa 10, as this unit is known, “offers views from almost anywhere in the residence,” Ms. Dixon said. “Its covered terrace offers a beautiful long view over the three kilometer shoreline of Cabo del Sol.” The residence is on the second floor of the building.

Santa Barbara architect Robert Glazier, a frequent contributor to Four Seasons, designed the buildings, which feature interiors by New York-based Meyer Davis Studio. The aesthetic pays homage to Mexico’s architectural heritage while keeping the interiors light and contemporary, Ms. Dixon said. “There are beautiful tiled roofs and authentic and really detailed buildings with fine textures of stucco. But you come in and the architecture lights up, ”she said. “It feels like Mexico, but in a light, airy and open house, with wood-paneled ceilings, see-through railings, lime paint, and metallic accents. It’s very organic.

Homeowners can customize from two color palettes, Ms. Dixon added: “one is cool, calm, and warm, and the other is more colorful and Mexican-influenced.” A Mexico City-based art consultant is working with developers to provide owners with options for Mexican designer artwork, Ms. Dixon said. “Buyers love to choose Pattern A or Pattern B and personalize them with art and props. “

This 4,519 square foot unit features five bedrooms, five and a half baths and 1,066 square feet of covered patio space.

Managed and operated by Four Seasons, this new property is owned by Los Angeles-based Robert Day and his family’s Oakmont Corporation, longtime owners of Cabo del Sol and the private Cove Club. The Four Seasons is located in the community of Cabo del Sol. Four Seasons owners can purchase memberships at the Cove Club, which features a Jack Nicklaus-designed golf course and renowned mountain-top restaurant.

“The club has only 385 members, all of whom also need to purchase real estate,” Ms. Dixon said. Four Seasons Residences will include a Harley Pasternak-designed fitness center, full concierge services, and private dining options.

Following: There is an elevator to the beach at this cliffside mansion in Los Cabos, Mexico

The residence spans one level. “It’s a very special floor plan, and you get an even greater view of the ocean being on the second floor of a three-story building,” Ms. Dixon said. “The building itself is truly beachfront with its feet in the sand.” Three of Casa 10’s main living areas offer ocean views.

Cabo San Lucas is located on the southern coast of the Baja California Peninsula in Mexico. The Four Seasons Project “puts you in the heart of the Cabo Corridor,” Ms. Dixon said. “A big plus of all the development there over the past few years is access to some great shopping, several hospitals, and even a Costco and Home Depot if you like.” Cabo del Sol is approximately 35 minutes from Los Cabos International Airport.

Sales in the region have been scorching, Ms. Dixon said. “Prices go up and speed is something we’ve never seen, and I’ve worked in this market for 15 years,” she said. “It’s amazing how many new buyers are coming in. ”

Owners of beachfront DeBordieu Colony can keep sandbags for research, according to…

Owners of seaside DeBourdieu colony can keep sandbags for research, according to DHEC…

A high-end seaside mobile home that has had Ireland talking sells for almost €500,000